Constanza is a town in the province of La Vega 1,250 meters above sea level, located in the Central Cordillera of the Dominican Republic. When you arrive in Constanza you will have to make sure you are in the Caribbean and not in Switzerland, thanks to the pines, the architecture of the summer huts, the small hotels and the splendid valley strewn with fruits, flowers and vegetables. Its climate is temperate oceanic or Atlantic climate with cool temperatures all year with an average annual temperature of the city is 18.4 dg C. During the months of January, February and March the temperature can reach -5 degrees. Constanza is a town that never ceases to captivate and surprise those who are looking for an adventure, spend a cool vacation and know the spectacular mountains and splendid forests of the Dominican Republic. Constanza, a scenic agricultural village, famous for the cultivation of flowers, strawberries and vegetables at 1,220 meters above sea level and with an area of ​​30 square kilometers, is nestled in the most fertile valley of the Caribbean, where flowers and Ornamental plants, like potatoes, carrots, lettuce, celery, garlic and large size strawberries. The village has its own culinary specialties, being the mashed celery strain.

Constanza is known for being the coldest city in the Dominican Republic and the entire Caribbean. It is a town and municipality of the province of La Vega in Dominican Republic. Located in the Cordillera Central, it is located approximately 1,220 meters above sea level and is also known as the Caribbean Switzerland. It is the highest city of the Dominican Republic. Constanta has a population of 50,600.2 Much of the population is descended from Spanish immigrants (from Burgos, Palencia and Vizcaya), Hungarians, Japanese, as well as fewer Arabs, Jews, Pakistanis, Koreans, Peruvians, Ecuadorians , Chinese and Brazilian. The people from Constanza of ethnic minorities usually live in colonies where they live according to the customs of their ancestors.

Tourist Attractions in Constanza
The municipality of Constanza, with all its sections and sites, is one of the most unique places not only in our country but in the Antilles. To strengthen this assertion we have more than 26 species of birds endemic to the area; A climate exceptionally different from the rest of the country, with temperatures ranging from 12 to 20 degrees in Constanza and from 0 degrees to 10 degrees in Valle Nuevo. Regardless of these particularities, there are geographic riches that allow the visitor to experience in their own flesh the experience of feeling the clouds that touch the mountains of the Central Mountain Range. Threads of waters that join when descending, forming streams and waterfalls that invite the tourist to take contact with the nature. To know the wealth of the valley of Tireo and Constanza that developed in a particular climate possesses the attribute to produce plants and fruits of temperate climates. Among other attractions of Constanza is its cold climate and natural freshness, The production of vegetables, vegetables, flowers and strawberries that supply the entire Dominican Republic. There are many tourist attractions such as the Salto de Aguas Blancas, the highest in the Caribbean and Central America with 92 meters, located in an impressive forest surrounded by pine forests. The Pyramid that represents the 4 cardinal points of the Island located in New Valley. Protected areas such as Las Neblinas Scientific Reserve, Ebano Verde Scientific Reserve, Valle Nuevo National Park and Jose del Carmen Ramirez National Park, the exclusive attraction of the hot springs of Constanza and many more. The Swiss Chalet cabins and mountain cabins where you can spend unforgettable holidays.

Jarabacoa, The City of Eternal Spring

Jarabacoa, nestled in the mountains, is considered The City of Eternal Spring in the Dominican Republic. The name of Jarabacoa is composed of the words 'Jaraba' and 'Coa', which is supposed to carry the approximate meaning of 'Land of Water Fountains'. Located in the same valley of Jarabacoa, at 525 meters above sea level in the heart of the Cordillera Central, it is known as the region of Eternal Spring. Pleasant temperatures, the longest rivers in the Caribbean (Rio Yaque del Norte, 300 kilometers), impressive waterfalls and the proximity of the highest mountains of the Antilles including the Pico Duarte of 3,087 meters, make Jarabacoa a unique place in The hemisphere. Populated by 40,000 inhabitants, the municipality of Jarabacoa offers all the possibilities to enjoy the unknown part of the Dominican Republic with its native flora and fauna and lush, colorful gardens, impressive landscapes and the quality of its people who are dedicated to the production of flowers , Vegetables, fruits and the best coffee. And let's not forget that Jarabacoa also offers culture; Painters, works of art, frescoes in the village church. Three main rivers pass through Jarabacoa: El Yaque del Norte, Jimenoa and Baiguate.

Jarabacoa has an average annual temperature of 22 ° C (72 ° F) and rainfall during most of the year. Temperatures show little variation, but generally between March and November morning and mornings are pleasant, afternoons are hot and nights are temperate; While between December and February dawns and mornings are cool or slightly cold, afternoons are mild and pleasant evenings.

Jarabacoa had been a territory inhabited by the Taino nation, who called it this way. When the Spaniards arrived at the Island, some settled in this place, looking for gold and silver, but then left the area. Then a process of establishment of massive population was given as a consequence of the first Haitian invasions on the Spanish part of the Island 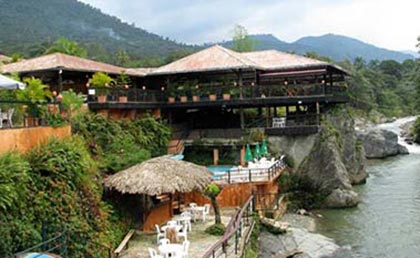 Book now cabins and hotels in the mountains of Jarabacoa and Constanza with Colonial Tour and Travel. Explore our catalog of hotels of different categories in the beautiful mountains of Dominican Republic
Hotels in Jarabacoa - Constanza 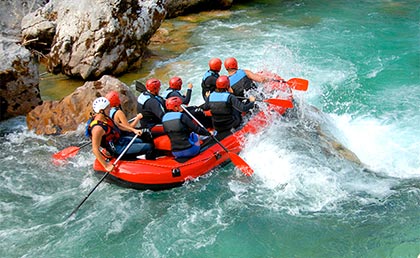 Jarabacoa is known for sports tours such as rafting, canyoning, rappeling, paragliding, trekking, horse riding and waterfalls. Book with Colonial Tour and Travel these ecological and cultural excursions in the beautiful Dominican mountains.  Book your tour now ! 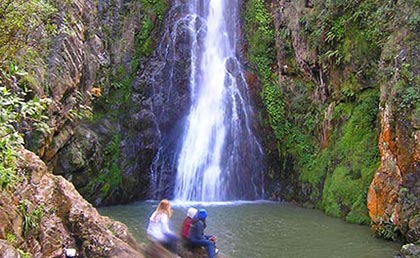 This beautiful waterfall in Constanta, is the highest in the Dominican Republic, is located in the unique place of the Antilles where there is alpine vegetation, surrounded by a majestic landscape, where the low temperatures recorded form a frosty winter 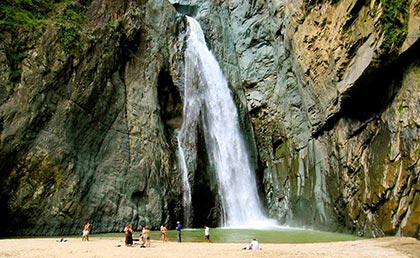 The Jimenoa Cascade in Jarabacoa, is a waterfall of 40 mts of height. It is reached through suspension bridges to the heart of the waterfall, you will enjoy spectacular scenery. The walk will take you through places where you can enjoy the beauty of the landscape. 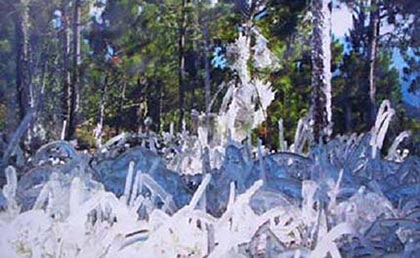 Constanza is known for being the coldest city in the Dominican Republic and the entire Caribbean. Its climate is temperate ocean, with fresh temperatures all year that can down to -5 degrees Celsius in January. 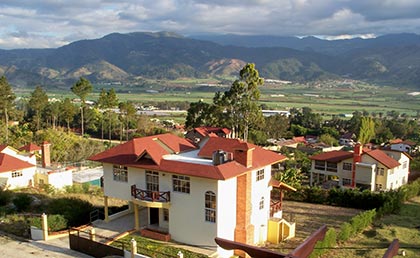 The valley of Constanza is characterized by its splendid beauty and its climate, produces large quantities of vegetables, fruits and flowers all year round, such as strawberries, garlic, beets, tomatoes, celery, lettuce and flowers of various types. 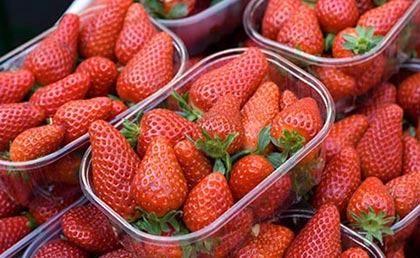 Fruits and Flowers of Constanza

Constanza's main economic activity is agriculture, there is a vast production of fruits and vegetables for import and local consumption, produces strawberries, grapes, apples, various vegetables and flowers. 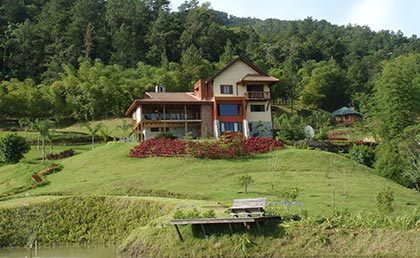 There are many cabins in the mountains and hotels near the rivers that together with the splendid Alpine landscape of Constanza and Jarabacoa, recall the hills of the European center. 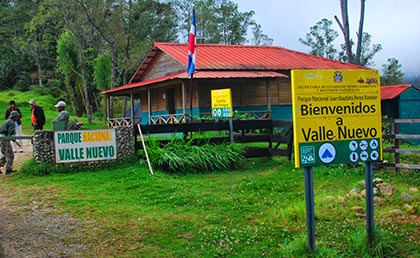 It is a protected area in the center that has a unique biodiversity in the Caribbean. Located at 2,842 meters elevation in a extinct vulcano called Alto Bandera. It is characterized by its own vegetation of the Neoartic ecozona..

Rafting
Maximum adventure and fun for everyone. Hop on the raft and enjoy the refreshing waters of the Yaque del Norte River, the largest river in the Caribbean. Accompanied by professional guides you will pass rapids and canyons that let your adrenaline rise to the maximum. You will discover places unknown by many. Action, nature, fun, an adventure of a lifetime Includes: Basic training / equipment (neoprene suit, life jacket, slippers, protective helmet). Breakfast, snack, food. Conditions: Know how to swim -More than 14 years. - Be in perfect health and physical condition

Canyoning
An exciting and safe adventure. Canyoning on the Jimenoa River, main tributary of the Yaque del Norte River. Descend by canyons and Jimenoa Jump. Enjoy refreshing baths in crystal clear waters and natural pools. Follow with us the course of the river that winds between virgin forests of the central mountain range. Accompanied by professional guides you will receive all the necessary training to enjoy the challenge to the maximum. Includes: Equipment (neoprene suit, slippers, protective helmet, harness). -Breakfast food. Conditions: -Know to swim -More 14 years. -To be in perfect health and physical condition

Waterfalls
Let us take you on horseback, jeep or Quad-Runner to two of the main waterfalls in our country, the Salto de Baiguate and the Salto de Jimenoa. Your visit includes a refreshing bath, a spectacular panorama, a light walk on a path bordered by lush vegetation, palm groves, wild fruit trees. Watch colorful and melodious birds. Do not miss this opportunity to know these two sources of life in our mountains.

Pico Duarte and Trekking
Pico Duarte, with 3,087 meters above sea level, highest peak in the Antilles. Travel with us 3, 4 or 5 days by walking or by foot to the roof of the Caribbean. Explore from the humid tropical jungle to the pinewoods of the J. Armando Bermudez National Park following threshes between thousands of ferns. Observe the parrot, parrot or goldfinch and other exotic birds, cross rivers and crystalline streams enjoying a spectacular panorama of three mountains, Pico Duarte, La Pelona and La Rusilla, which surpass 3,000 meters. Get to know the birth of the Yaque del Norte River, the longest river in the Caribbean, the Tetero Valley located more than 2,000 meters above sea level and the most preserved forests of the island. An unforgettable adventure. We offer three different trekking programs: 1) Pico Express: 3 days and 2 nights 2) Pico Duarte: 4 days and 3 nights. 3) Pico Duarte and Valle del Tetero: 5 days and 4 nights. In addition to the Duarte Peak Expeditions, we offer TREKKING for 1 day.