This tour is only available in the period from December 15 to March 30 of every year.

The visit to the Sanctuary of the Humpback Whales in Samana is one of the most beautiful excursions in the Dominican Republic, the beautiful Samana Bay and the Silver Bank, located in the Northwest of the country, where every year, between December And March, about 2,000 humpback whales come to reproduce in the warm waters of the Atlantic Ocean.

Until recently, it was believed that only 85% of the Atlantic humpback whales were born in Dominican waters and returned annually to mate and breed. But a recent study revealed that all populations of the Atlantic come to reproduce in our waters.

It's an amazing sight waiting for you every summer in the Samana Bay, humpback whales that come from the seas of Iceland, Greenland, Canada, and North America, who come to the Caribbean Sea to give birth and seek a mate in the hot water. From January to March, thousands remain in Samana Bay.

The show is impressive, when the 40-ton males jump up the water and fall down a few meters ahead. If it does not win any female reactions the male tries to attract them with a long and monotonous song that the whales can hear up to a radius of 30 kilometers. Only those who are diving can hear this song. After giving birth to their children, the whales prepare their return to the north. Since 1986 "Banco de Plata", Samana, has become a sanctuary for the protection of whales.

Samana is considered one of the best places in the world for humpback whale watching.
These beautiful and giant marine mammals, breathe air and come out regularly to the surface, remain in apnea for about 20 minutes, but can remain under water for up to 40 minutes. After the long trip they make and during which they do not feed, they spend part of the winter in the Bay of Samana, still without food. That way they will lose the fifth of their weight.

Whales come to give birth to their little ones because the whalebone, when born, has a very thin layer of fat to withstand the cold waters. At birth, it measures between 3.50 and 5 meters, and weighs a ton. To constitute a protective greasy layer and acquire enough forces to follow his mother on the return trip, will consume, daily, about 200 liters of breast milk that is very nutritious, the whale is going to take 45 kilos a day.

It's a thrill to watch the mother play with her offspring. In this regard, the whale only has a single small and this, every 2 years. Gestation duration is 11 to 12 months. Well, come to give birth to your baby to the place where he conceived it! Although it is rare, sometimes it happens that some of them are coupled during the same season as the birth.

Colonial Tour and Travel offers you this beautiful excursion to the Humpback Whales Sanctuary departing from all the hotels of the different zones of our country, departing in comfortable and safe boats from the picturesque port of Samana, with lunch and drinks included and accompanied by A marine biologist, where people will be able to approach a few meters of these colossal mammals and contemplate this fascinating panorama that will leave them astounded by so much beauty. This excursion is only possible from January to March.

Humpback whales can be easily observed, either at their feeding or breeding grounds. Whale watching has become an increasingly popular worldwide activity, and the Dominican Republic is fortunate to have one of the largest and best humpback breeding sanctuaries in the world. The Dominican government enforces strict whale protection laws and guidelines to ensure the safety and conservation of these wonderful animals. Whale watching can be a thrilling experience for anyone interested in nature and the preservation of our natural resources. We must continue to respect and protect these incredibly gentle giants so we can enjoy them for a long time to come. The following photos are images of what one would see on a typical whale-watching tour in Samana Bay, Dominican Republic. 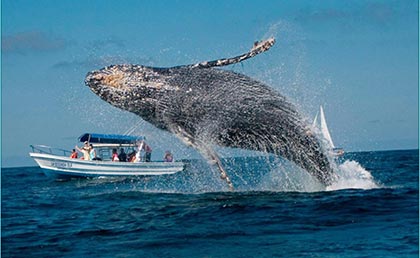 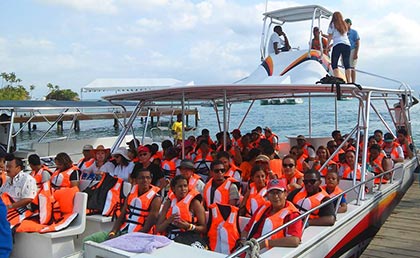 Ready to live from Samana port 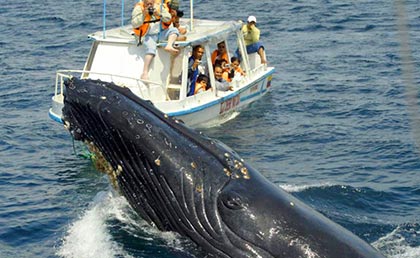 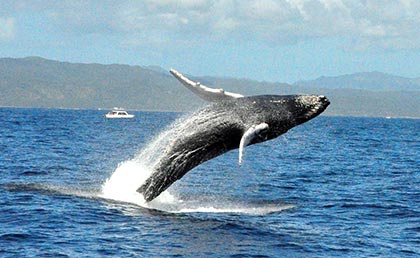 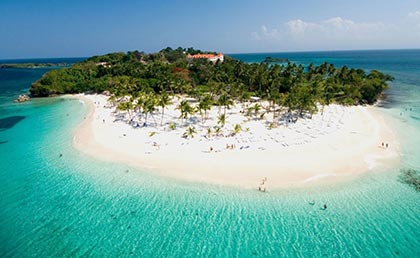 We will lunch at Cayo Levantado 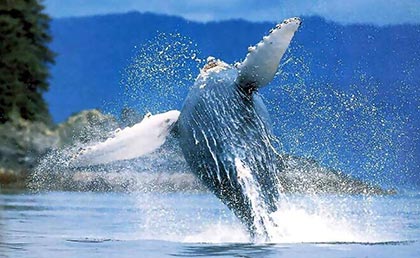 Colonial Tour and Travel
The Humpback Whale Sanctuary Tour includes:
Transportation in comfortable air conditioned buses from the hotels of Santo Domingo, Boca Chica and Juan Dolio and by airplanes from Punta Cana- Bavaro and La Romana-Bayahibe to Samana
Approach in comfortable and safe boats in the Bay of Samana.
Safe Whale Watching and explanations of a Marine Biologist and an expert guide.
Visit to the island of Cayo Levantado
Accompanying an expert guide
A delicious lunch buffet in Cayo Levantado of creole food with drinks included
Taxes included

Important:
The Humpback Whale Sanctuary Tour is only available from December 15 until March 15 of each year