Barahona is located in the southwest of the Dominican Republic, 190 kilometers from Santo Domingo, Barahona has an  impressive vegetation with beautiful coastal areas throughout the country and is the only place where beaches, mountains and rivers are combined, forming between the three a perfect combination to live unforgettable moments .

Its beaches are still virgin, rivers and mountains, that although many citizens visit Dominicans and foreigners, still what is missing for discovering is a lot.

In Barahona there are beautiful beaches such as "El Quemaíto", named for the warmth of its waters and soft stones. It is located about 10 kilometers from the city and is approximately two kilometers long. Like most of the beaches in this area, it is jealously covered by an immense green mountain and, at the margin, a beautiful coconut grove. There is also San Rafael, a beautiful beach and river very close to Barahona City  .

The main river is the Yaque del Sur, that flows a few kilometers north of Barahona City. The second important river in the province is the Nizao. Other rivers, of short distance, are the Palomino, Bahoruco, San Rafael, Sito and Los Patos. The Rincón lagoon or Cabral is shared by the provinces Barahona and Independence. Previously there were the Caballero and Fishmongers but they have been dried and have practically missing; have been dried for agricultural and livestock use

Much of the province, in its portion western, is occupied by the "Sierra de Bahoruco". "Sierra Martín García", on the border with Azua, the eastern end of the "Sierra de Neiba" and "Loma de Sal y Yeso"

There is a wonderful landscape along Highway 44, on the Costa Azul of Barahona, in the Dominican Republic. On one side the exuberant vegetation of the tropical jungle of the Sierra de Bahoruco and on the other the beaches with turquoise waters of the Caribbean Sea. Juan Esteban, Bahoruco, Paraíso and Enriquillo are some of the fishing villages found on the coast. The main beaches are San Rafael, Quemaíto, Saladilla, Los Patos and Paraíso. The one in San Rafael is one of the busiest. Its waters are rough and young people have fun with the coming and going of its waves. The San Rafael river flows into the beach. Its cold waters are dammed forming pleasant pools of crystalline water that cause an invigorating bath.

Currently, Barahona has a mixed economy that combines agriculture, mining and tourism, with an industrial port and a free zone dedicated to textile production. Among the most important companies in the area are: CEMEX Dominicana that exploits gypsum from a mine, Rica with dairy production, the "Central Sugar Consortium" with sugar production, EGE Haina with electricity production, Wilbis Dominicana with zones of free exchange and Block Khoury which produces and exports building materials. Agriculture and the production of cane, bananas, coffee, fruits, sorghum, yams, yautía and others, as well as the extraction of minerals such as Larimar, marble, gypsum, alabaster, kaolinite (for the production of bottles), mineral salt and materials of construction, are among the main activities of Barahona.

Agriculture prevails within productive activities, with the production of bananas, coffee, various fruits, yams and yautía among others; dairy farming, fishing, mining activities such as the extraction of larimar, marble, gypsum and alabaster; sea ​​salt and building materials.

Barahona has an industrial port, a free zone dedicated to the production of textiles, and a mixed production, agricultural, mining and eco tourism.

The city has an interesting architectural heritage, represented by a series of vernacular-style buildings, concentrated mainly in the older urban areas. Among the buildings that represent Barahona, we can mention the Arc de Triomphe that welcomes visitors and was built during the Trujillo era. The Nuestra Señora del Rosario Cathedral, built in 1948, next to the curial house, has a bell that surpasses the entire building.

The Municipal Palace located in front of the Central Park was built in 1935 and was awarded a tower with a clock, becoming one of the icons of the city.

The old church, built in 1952, was the first block church, with beautiful architecture and green areas. The Guarocuya Hotel was built in 1959, during the era of Trujillo and the Sugar Mill, whose construction began in 1918, at the same time as the construction of the neighborhood known as El Batey, where you can still find wooden houses of the people who worked in the managerial, with two-sided roofs mounted on pile bases. The correct use of green areas should be highlighted as well. The fire department building was built in the early 1900's and still contains the same structure as a series of objects from the beginning of the last century.

Cradle of great artists, writers, painters and politicians, the Municipality of Barahona is the nerve center of the Province; counting on all the facilities of the educational centers of the higher level, the technical high schools and concentrating the largest number of branches of the Commercial Bank in the region.

From María Montez, one of the great Hollywood stars of his time; Casandra Damirón, a leading figure in Dominican folklore and in honor of whom the “Casandra Awards” have been instituted, awarded annually by the Association of Art Chroniclers; Milton Peláez, humorist, television producer and publicist; Jaime Shanlate, composer, popular decimeter and lawyer; Ramón Oviedo, master of the plastic arts; Miguel Guerrero and Oscar López Reyes, Journalists; Hugo Gulliani Cury, economist; Socrates Nolasco and Matías Ramírez Suero, writers; even José A. Robert, José Joaquín Bidó Medina, Jottin Cury, Rafael Suberví Bonilla (Fello), have been and are part of the rainbow of personalities that have existed in the Municipality of Barahona.

María Montez, the great movie star, was born in 1912 with the name "María Africa García Vidal" and was one of the most beautiful women of her era, reaching stardom in Hollywood and European cinema. She married French actor Jean Pierre Aument, with whom she gave birth to a female named Tina Aumont. María Montez was an actress who worked in movies and theater and also wrote poetry and songs. She tragically died in Paris in 1951. The other big star, Casandra Damiron, was born in 1919 and began performing at the age of six at the "La Unión" theater in Barahona. In the forties, she began singing in the capital city on the radio station "La Voz del Yuna" and on "La Voz Dominicana". Casandra made the "merengue" and Dominican music well known in Europe, the United States and other Latin American countries, accompanied by her group of folk song dancers. She died in Santo Domingo in 1983.

In addition to artists in the entertainment world in Barahona, this city has an active community of literary artists, plastics, stones from Larimar, metals, shells, natural fibers, etc .; the latter located primarily in Bahoruco and in the neighborhoods of the coast and in the center.

The type of food in Barahona and on the southwest coast is first accompanied by fish. This because of its proximity to the Caribbean Sea, particularly rich with various types of fish such as "carite" and "dorado", as well as colirubio and crustaceans such as shrimp and prawns. A delicious boiled prawn in seasoned water or fried fish, accompanied with the traditional "tostones" -, fried plantains -, is the easiest way to eat. The city's restaurants offer various meats, particularly goat casserole.

The festivities of Barahona have their cradle in the remote station of the colony, from whose time those of the May Cross, Carnestolendas, San Juan Bautista, Nuestra Señora de Las Mercedes and San Andrés remain in memory. Its original platform was woven by the Spaniards and the black slaves, in a syncretism that has been majestically espoused in these five centuries. Each town of the Dominican Republic adopted its patron or virgin of the Catholic saints. He is considered the protector of the community, which in turn pays him devotion and honor during one day of the year.

The festivities of Barahona began to be celebrated in the years following the official installation of the first priest of his parish: Father Francisco Antonio Jannarelli, on May 16, 1874. The chosen patron was the Holy Cross, as well as el Seybo, Valverde and 17 other towns. She celebrates her day on May 3, and is also exalted on September 14. In 1909 the cult of the protector was changed. That year the "Commission for Patron Saint Festivities of the Virgin of the Rosary", patron of the Santa Cruz parish of the population. The church was under the direction of Father Miguel Fuertes, who on September 30, 1909 was appointed a member of the committee. It was also made up of authorities and personalities of the municipality. 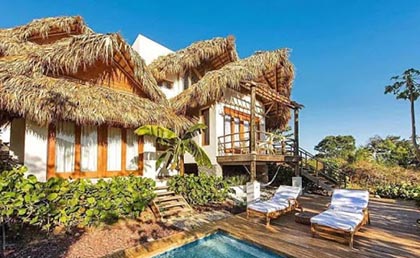 In Barahona there are no large hotel structures, but there are wonderful small hotels with concepts you will never forget like Casa Bonita, Rancho Platon, Eco del Sea. Visit and select your hotel: Book hotels in Barahona 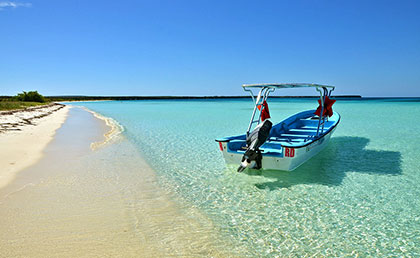 Colonial Tour and Travel has prepared for you a fun Excursion Program for complement your vacation in Barahona, like Bahia de las Aguilas, San Rafael, Los Patos, las Marias. Book your tour now! 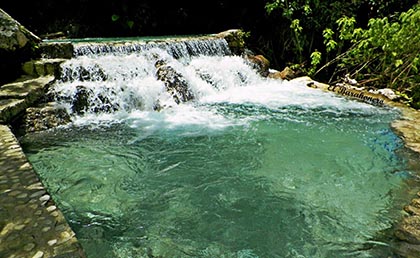 It is one of the most famous, delicious and refreshing to take a dip in this river that flows into San Rafael beach. 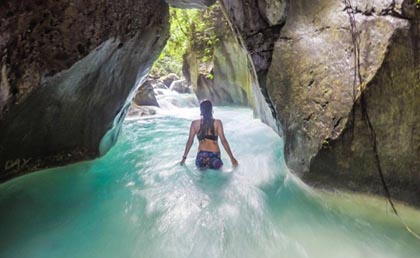 It is impressive, with crystal clear waters

It is a private place in Barahona. with several natural pools of the San Rafael River. 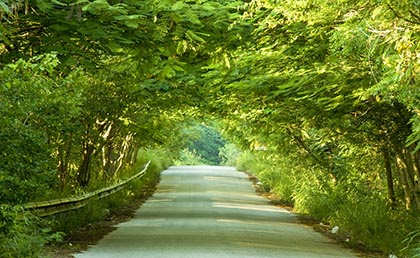 The "Magnetic Pole" is an optical effect, on the Polo, Barahona road where everything seems to be falling upwards. Incredible and very funny! 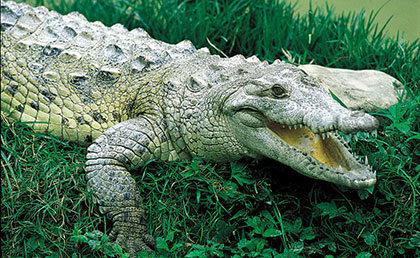 It is the largest lake in the Caribbean, it is 44 meters below sea level. We will explore the lake and Isla Cabritos, in its center, and we will observe the population of American crocodiles, flamingos, and other birds endemic that houses this wonderful lake. 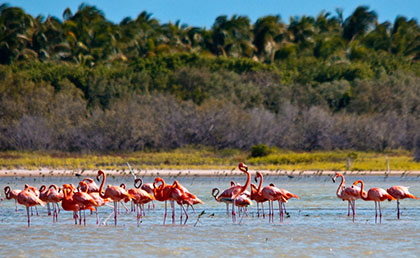 The Oviedo Lagoon is the largest lagoon in the Dominican Republic, with a salt water level three times higher than the sea. Has more 10 km long, surrounded by dense mangroves and dotted by 24 keys where you can observe flamingos, gray and blue herons, western shorebirds. 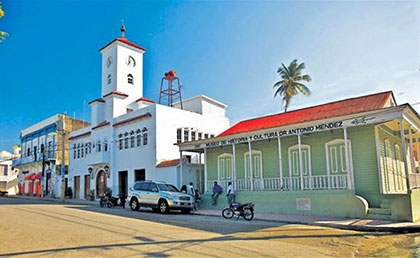 The city of Barahona is a beautiful town, of proud, hospitable and happy people, you must know it. 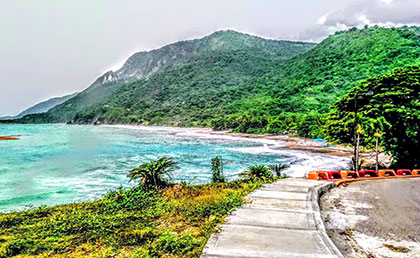 La Ciénaga is a municipality of Barahona, a fishing village with wonderful views of its beaches. From the viewpoint you can see its entire coastline bathed by turquoise waters and a majestic mountainous landscape. 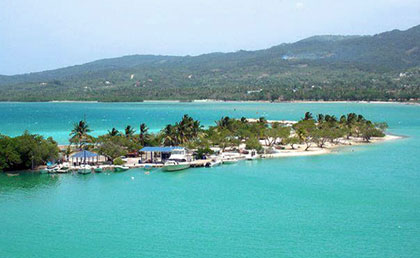 El Cayo is one of the beaches preferred by the Barahoneros because of its proximity to the center, it is very beautiful. 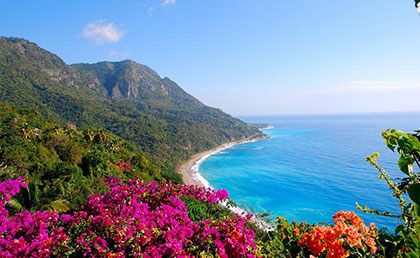 It is a beach with impressive deep blue waters and soft waves, with white stones that make a special sound with the rocking of the sea.